The temple was built in the fall of the 10th lunar month in 1049. The pagoda has only one compartment on a stone pillar in the middle of the small Linh Chieu lake with lotus flowers. Legend has it that the temple was built according to the dream of King Ly Thai Tong (1028-1054) and according to the suggestion of the monk Thien Tue. In 1049, the king dreamed that Quan Yin Buddha sitting on the throne led the king to court. When he woke up, the king told the story to me and was advised by the monk Thien Tue to build the pagoda, the stone pillar as in a dream, as the lotus of Quan Yin Buddha placed on the column as seen in the dream and for the The monk goes around the chanting bridge to prolong the blessing, so the pagoda is named Dien Huu.
Every year on April 8 lunar calendar, the king went to the temple to make a bathing Buddha. Monks and people throughout the Thang Long Citadel attend the ceremony. After the bathing ceremony, the king stood on a high tower before the pagoda drop a bird to fly, then people tossing birds flying in the cheers of a big festival.
In 1105, King Ly Nhan Tong rebuilt the pagoda and set up two white porcelain towers in front of the courtyard. In 1108, Nguyen Phi Lan ordered me to cast a very large bell, weighing a tens of two thousand pounds, named “General Sentence” (Bells awaken people). This is considered one of the four great gas – four major works of Vietnam at the time – is Bao Thien tower, Qui Dien bell, Pho Minh cauldron and Quynh Lam statue. “General Assembly” casting too heavy do not hang up, so that the ground is not heard. One dropped a bell on a field near Nhat Tru Pagoda, this field has many turtles, so it is called Quy Dien bell (bell turtle field). In the 15th century, Minh invaders invaded and captured Dongguan (Hanoi). In 1426, Le Loi led the Lam Son insurgents to attack, and besieged. Minh Minh lacked torn weapons weapons, General Minh is Wang Tong sent messengers to break the Quy Dien bell for the bronze. Minh lost troops, but Quy Dien bell is no longer.
The pagoda of the tower of Dien Linh (Doan pagoda), in 1121, wrote: “Due to the devotion of the Buddha and the devotion of the Buddhist virtue (Buddhism) should be directed to the famous Forbidden Garden (Garden on the side). west of the citadel of Thang Long), built the temple of Dien Huu according to the old regime, together with the king’s new idea (saying: follow the path of construction of Ly Thanh Tong pagoda, new of Ly Nhan Tong that repaired the temple better than before “.
In the time of the Tran Dynasty, the pagoda was not the Ly pagoda because of the old books. In 1249, “… in the spring, January, Dien Huu Pagoda was repaired. ” 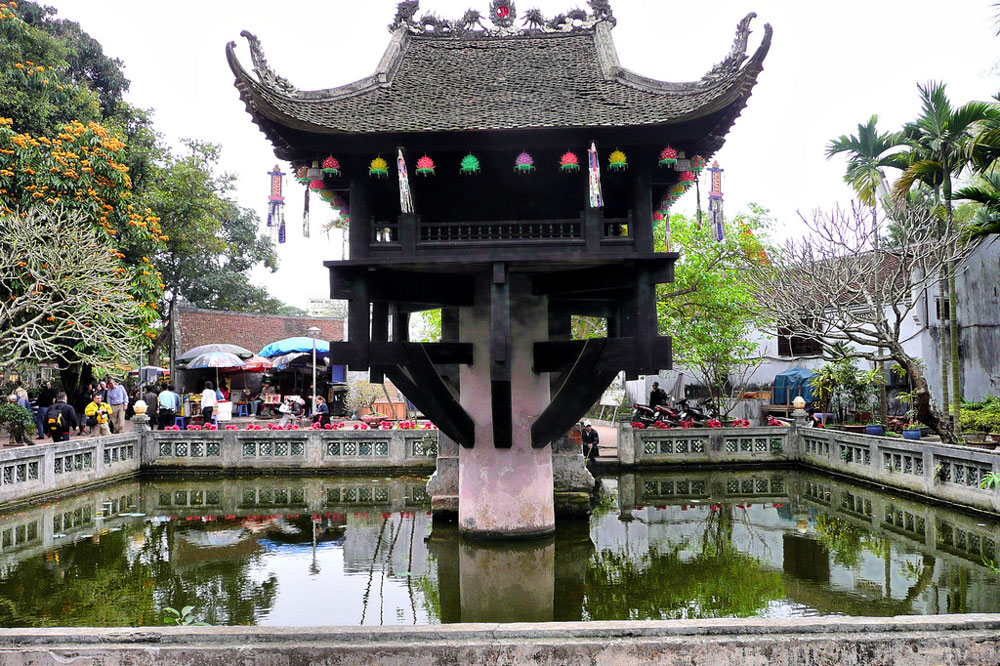 One Pillar Pagoda was restored between 1840-1850 and in 1922. Our Lotus saw is now repaired in 1955 by architect Nguyen Ba Lang.
Beside the pagoda, there is a three-door pagoda, with the word “Dien huu tu”, a new pagoda built around the beginning of the 18th century, with the one pillar pagoda.
According to historical documents, the architecture of a column from the Ly. In Hoa Lu, Ninh Binh in the Temple of the daughter of King Dinh Tien Hoang, there is a stone pillar high, six sides, engraved with the Surangama, Le Hoan period (981-1005). Above the column is a lotus throne. Long Thuy Thai Binh (1058), Ly Thanh Tong (1058), built Linh Quang in Thang Long, in front of the bell tower, a six-sided Lotus-shaped pillars. Thus, before the construction of One Pillar Pagoda, that architecture was a traditional art practice.

The temple has a wooden structure, in the temple placed Buddha statue of Quan Yin to worship. In 1105, King Ly Nhan Tong expanded the architecture of the pagoda with Linh Chieu Lake. Later, the scale of One Pillar Pagoda just left the small pagoda on the stone as the image today. French colonialists before withdrawing from Hanoi blasted the temple. However, the temple was restored as before. The One Pillar Pagoda currently consists of square towers, each with 3 m in length, curved roof, 4 m high (not submerged), 1.20 m in diameter with two piles overlap into one block. The top floor of the column is a system of wooden beams to support the tower above. Chinese tile roof, four corners bend, on the double tentacles. Today, there are no lotus leaves on the pillar as mentioned in the Ly inscriptions, but the pagoda rising above the water still remains a unique architecture, suggesting a lotus flower reaching up to the pond. The square is covered with railing made of glazed green brick. The architecture of the pagoda is built close to the architecture of the Le dynasty. In the temple garden there is a Bodhi Tree from the Buddha, given by President Rajendra Prasad on the occasion of President Ho Chi Minh’s visit to India in 1958.