The early Ben Thanh market was built of brick, timber framed, roofed with paintings, described as “dense market” along the river. The wharf was early in the spring with plating, maneuvering the sea, where the wharf had the ferry crossing the sea. The northern street is Sa huu fence, the bridge over the bridge, the two sides of the armpit bridges have tile streets, gathering hundreds of goods, along the river wharf to small fishing village to link. After the rebellion of Le Van Khoi (1833-1835), the city was destroyed, Ben Thanh market is not as busy as before.
Before French colonized Gia Dinh, the area around Gia Dinh (now Phung) was only 100,000 people and Ben Thanh market was the most crowded. Beside the market, along the banks of Ben Nghe River, the commercial boats often crowded together, forming a floating city on the water. However, then the market area on the new wharf is just a row of tile roofs. In February 1859, France occupied Gia Dinh and two days later, Vietnamese soldiers organized fire to burn down the city. Of course, the Ben Thanh market was burned down.
Having settled in Cochinchina, in 1860, the French built the Ben Thanh Market at the old site (when the Republic of Vietnam was the site of the General Treasury, now the School of Staff Training on Nguyen Hue Street). The market was built with bricks, ribs, and leaves. By July 1870, the market had been burnt down for a time, and it had to be rebuilt with bricks, iron slates, roofing tiles, all five of them: foodstuffs, fish stalls, meat stalls, food stalls and grocery store In this booth, only the butcher’s pavilion is covered with iron, blue lining. 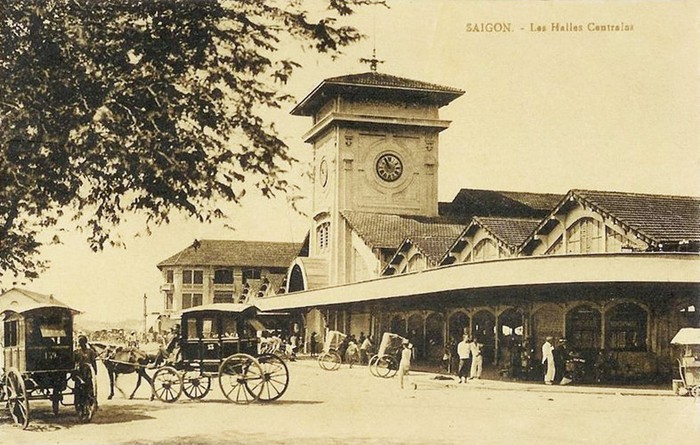 At that time, the market was built on the south bank of a canal, called the Great Hall. In front of the market, along the canal is a street named by the French Charner Street, or another name is Rue de Canton, because most of the Chinese business here is Quang. East. The opposite side of the canal is the Rigault de Genouilly. Due to the intersection of the urban area and the confluence of two waterways, the Grand Canal and Cau Sau canal (now Ham Nghi Street), boats can dock and dump people to the market on either side of this. or the other. And people on the mainland want to go through the market can go through the beautiful wooden bridge, so Ben Thanh market always bustling. In 1887, the French closed the canal and merged the two roads into a Charner Boulevard. Indigenous people referred to as Kinh Lap Road (now Nguyen Hue Boulevard). 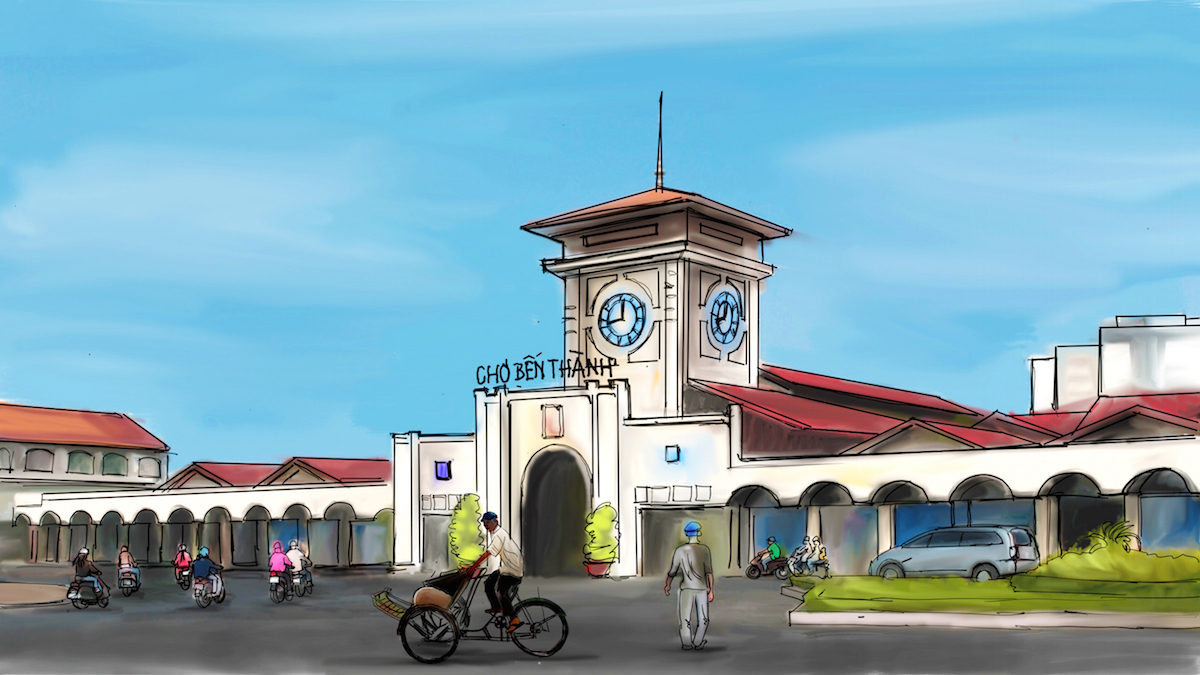 The market was crowded with shops mostly from the Chinese, Indians and French. However, in mid-1911, the market became old and fell into a state of collapse. To avoid disaster, people have to break the market, only meat, because the roof is light, so not destroyed. At the same time, the French also chose a location to build a new market to serve the growing demand for trade. The selected location is near the My Tho railway station (now Saigon Bus Station), which is the Ben Thanh market place today.

The market area, which is an old pond, called the Marais Boresse, was occupied by the French. The markets are planned on four sides by four roads. The façade is Place Cuniac, named after the Western Cuniac commune, who laid out the work of filling the pond.
The Vietnamese are known as the Ben Thanh Market, although the official name has been changed to “Republic Square”, “Dien Hong Square”, then “Quach Thi Trang Square”. The northern market is Rue d’Espagne, east is rue Viénot, and west is rueSchroeder. In 1955, the first republic of Vietnam, the four roads were renamed Le Thanh Ton, Phan Boi Chau and Phan Chau.

The new market, commissioned by Brossard and Maupin, was built between 1912 and the end of March 1914. The festival was inaugurated at the time of the so-called “New York Assembly”, taking place on the 28th, 29th and 30th. March 1914, with fireworks, floats and more than 100,000 participants, including from the provinces. 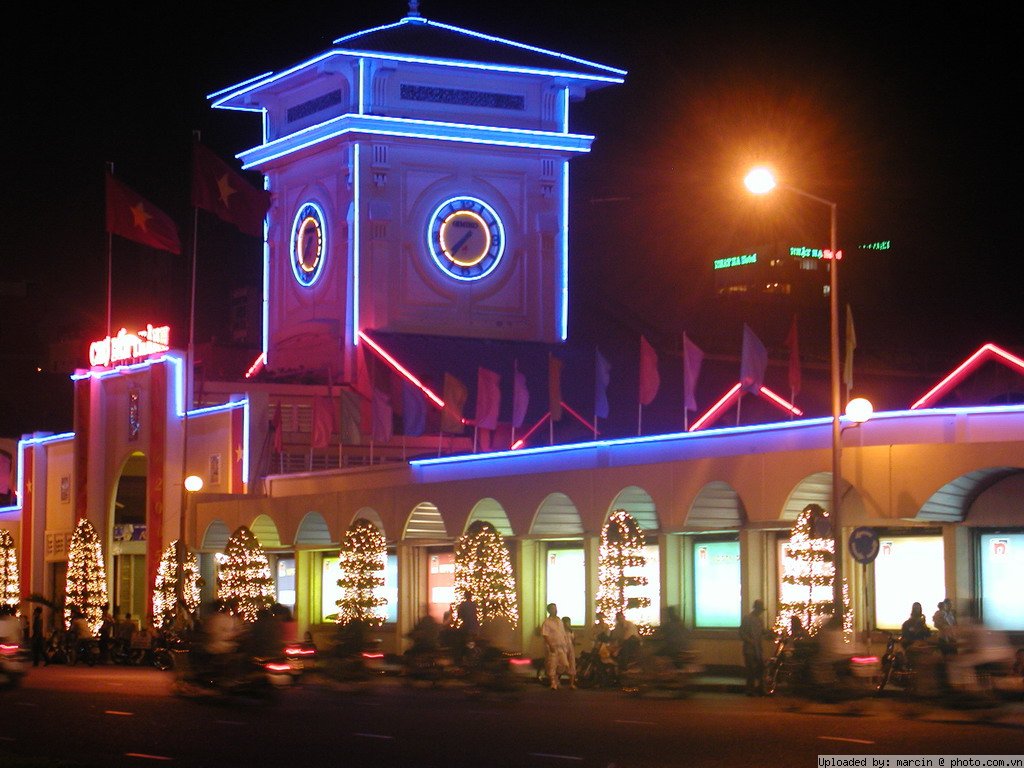 This market is still called Ben Thanh; However, before 1975, the name Ben Thanh market usually only in the book, while people often refer to the Saigon market or New Market. meat. The rest was destroyed and was built by the French as the Treasury. The two sides of the market until 1940 were east and west bus stops. Later, this bus station was moved to another place.
Ben Thanh market after many times thay đổi meat, nhưng đồng tower clock still not change …
Ben Thanh Market has operated continuously for 70 years. From 1 July to 15 August 1985, Ben Thanh Market was renovated and repaired.

Not just a place of business, a hundred years ago this market has become a witness to the city’s vicissitudes, changing the vicissitudes of the city, the economic face of the development of a city. The largest and most watery point of reconciliation between ancient Saigon and now.
In recent years, Ben Thanh Market is an indispensable site for any tours to Ho Chi Minh City. Ho Chi Minh. Obviously, visitors to the market are not merely looking for souvenirs or souvenirs but also looking for their own image, a characteristic characteristic of the everyday life of a city. is the most obvious.
Ben Thanh is considered as the largest retail market in the sense that it can be found in this place all kinds of goods, from popular to high-class, especially the most selective food. There is nothing missing from the onions, the chili, the vegetables, the fish, all kinds of seasonal fruits, to candy, cloth, shoes, handbags, electronics, souvenirs…
Ben Thanh Market has a total area of ​​13.056m², average daily pick up about 10,000 visitors to visit and visit. The market has 1,446 stalls, 6,000 small businesses, 5 businesses, with four main doors and 12 side doors radiate in four directions.
Cua Nam (overlooking Quach Thi Trang Square) with the symbol of the three-sided clock tower, the main gate, inside the cage is the place to sell the goods and dry food.
Cua Bac (on Le Thanh Ton Street) is vibrant with fresh flower stalls and fruit trees inviting passersby.
Cua Dong (Phan Boi Chau Street) attracts customers with colorful cosmetics and candy.
West Gate (Phan Chu Trinh Street) is a place to attract women because of the diversity of styles and sizes of shoes, fine art items, souvenirs.
In addition, along the corridors surrounding the canteen, booths display various kinds of consumer goods for tourists, especially souvenirs, ready-made garments, silk fabrics, handicrafts fine art, embroidered pictures, brocade …

Referring to Ben Thanh Market, you can not miss the food court with the presence of a full range of traditional dishes throughout the country. By the end of January 2012, Ben Thanh Market has been named as one of the 10 most popular street food destinations in the world by the Food and Wine Magazine, which is a strong affirmation of that richness. .

Ben Thanh Market is also very vibrant at night, starting at 7 pm, the stalls flow into Phan Boi Chau and Phan Chu Trinh streets along the market with fine art stalls, souvenirs, clothes and special. is the food.

Visitors to Ben Thanh market mainly divided into two types: visitors and close customers. Visitors are mostly tourists, most of them are foreigners, and intimate customers include residents living in the surrounding large streets as well as longtime residents of Saigon.
The most unique, nowhere are the beautiful sales, fashionable and foreign language proficiency as Ben Thanh market traders. Stepping into the market is the waving of foreign tourists, the headphones are heard in English, French, Japanese, Thai … as a chorus. It can be said that few markets in the country are attracting high density, multicolored and multinational tourists like this market.

Local customers when entering the market are considered as family members, if young are often called hard, sister or sister, she Ba … sweet! For a while, if he returns to the market will be affectionately called mother, mother, aunt, and some time will not be poor when the people reverently call … foreign!
Goods here are more diverse places, there are all kinds from exports, processed goods to luxury goods. Food is standard both fresh and delicious, many items are not available such as vegetables, fruits, fresh fruits, fresh seafood, abalone specialties, fish, sea cucumber … are taken directly to from Tan Son Nhat airport.

Although the trend of shopping for a modern city is in supermarkets or shopping centers, sometimes in the fast-paced lifestyle people also need to live slower, as a way to regain balance for the soul. That is one of the reasons for Ben Thanh market in particular and the traditional markets will generally remain with time. And the soul of Ben Thanh Market is right in the cage, where urban life is most lively through the intimate communication between people and people.